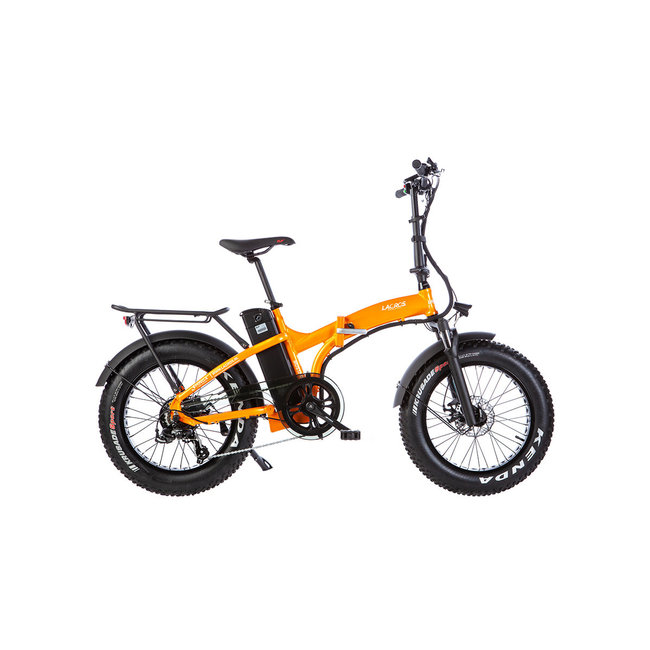 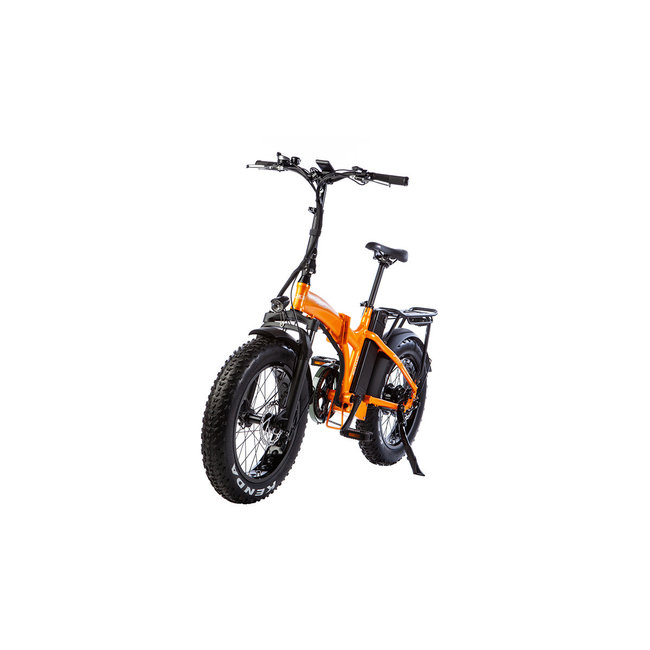 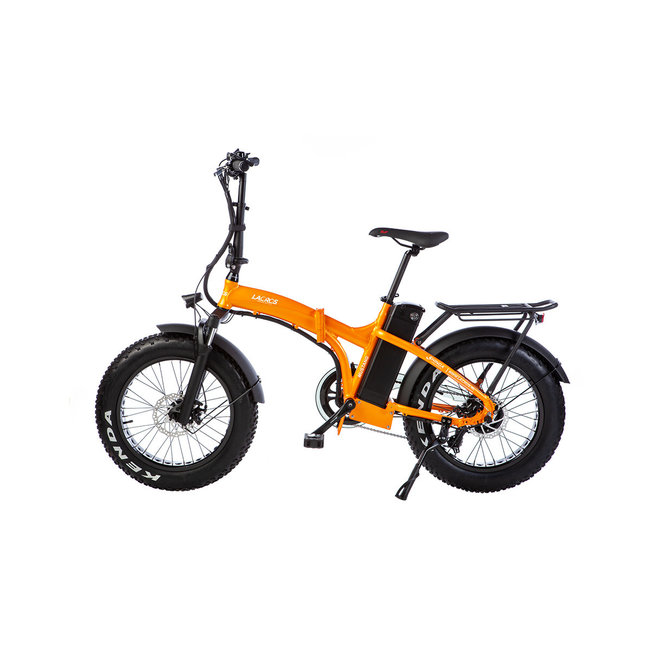 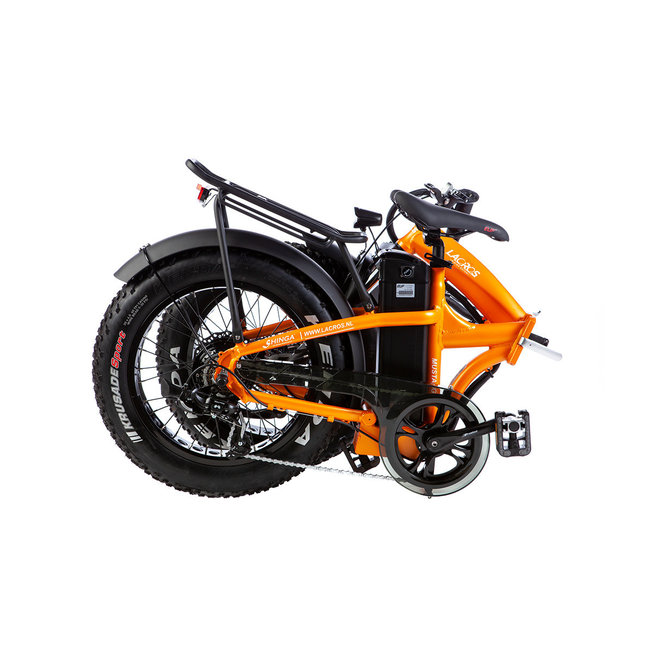 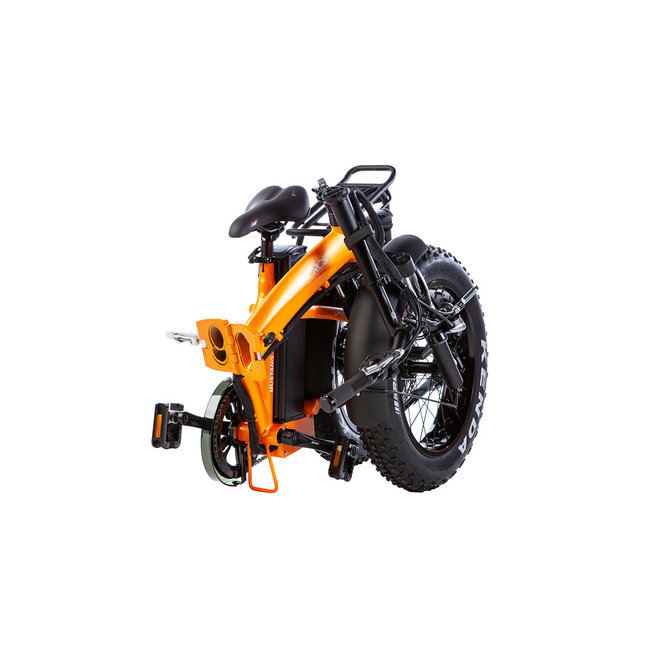 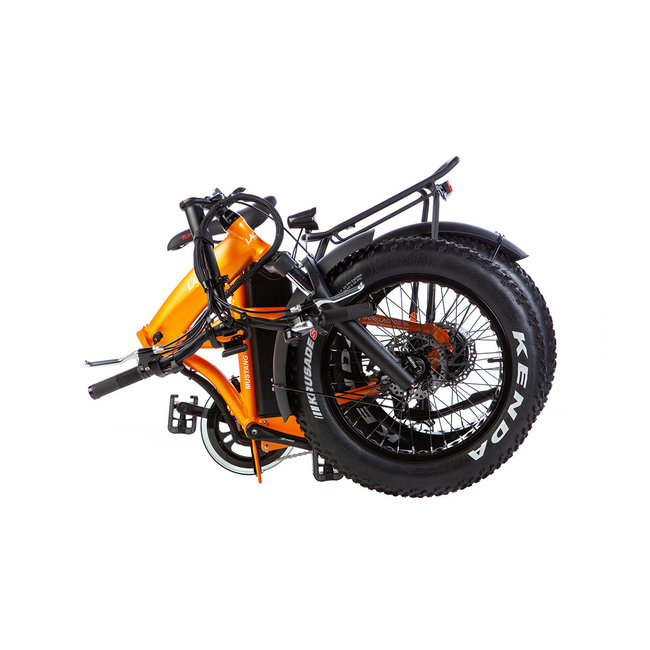 - Electric folding "Fat bike"
- Silent and powerful 250W Bafang engine
- Simple to fold in a few steps
- Without support the cycling experience of a "normal" bicycle
- A cool bike to be seen with Read more..

This new electric folding bike is a "Fat bike" with a 250W motor with which you can reach speeds up to 25km/h. The frame and front fork is specially designed for this bike. The battery is placed in the middle for a better weight distribution, which benefits the driving characteristics. The 250W Bafang motor is powerful enough and with the 13Ah/468Wh Li-Ion polymer battery you have fast acceleration and you can easily cycle against a strong wind or up a steep slope. What makes this "Fat bike" special compared to other Fat bikes is that this model is foldable so that you can easily store in your car, boat, camper or caravan.

The Lacros Mustang with rear-wheel motor gives, if desired, a very powerful support in every situation, such as with long distances, against the wind or against steep slopes. The 250W motor from Bafang is powerful, very reliable and has fast acceleration. In combination with the 7-speed Shimano and an efficient magnet rotation sensor, the Lacros Mustang with support has a very natural cycling experience. The bicycle is equipped with disc brakes for more powerful and less abrupt brakes and extra wide tires for a cool look. 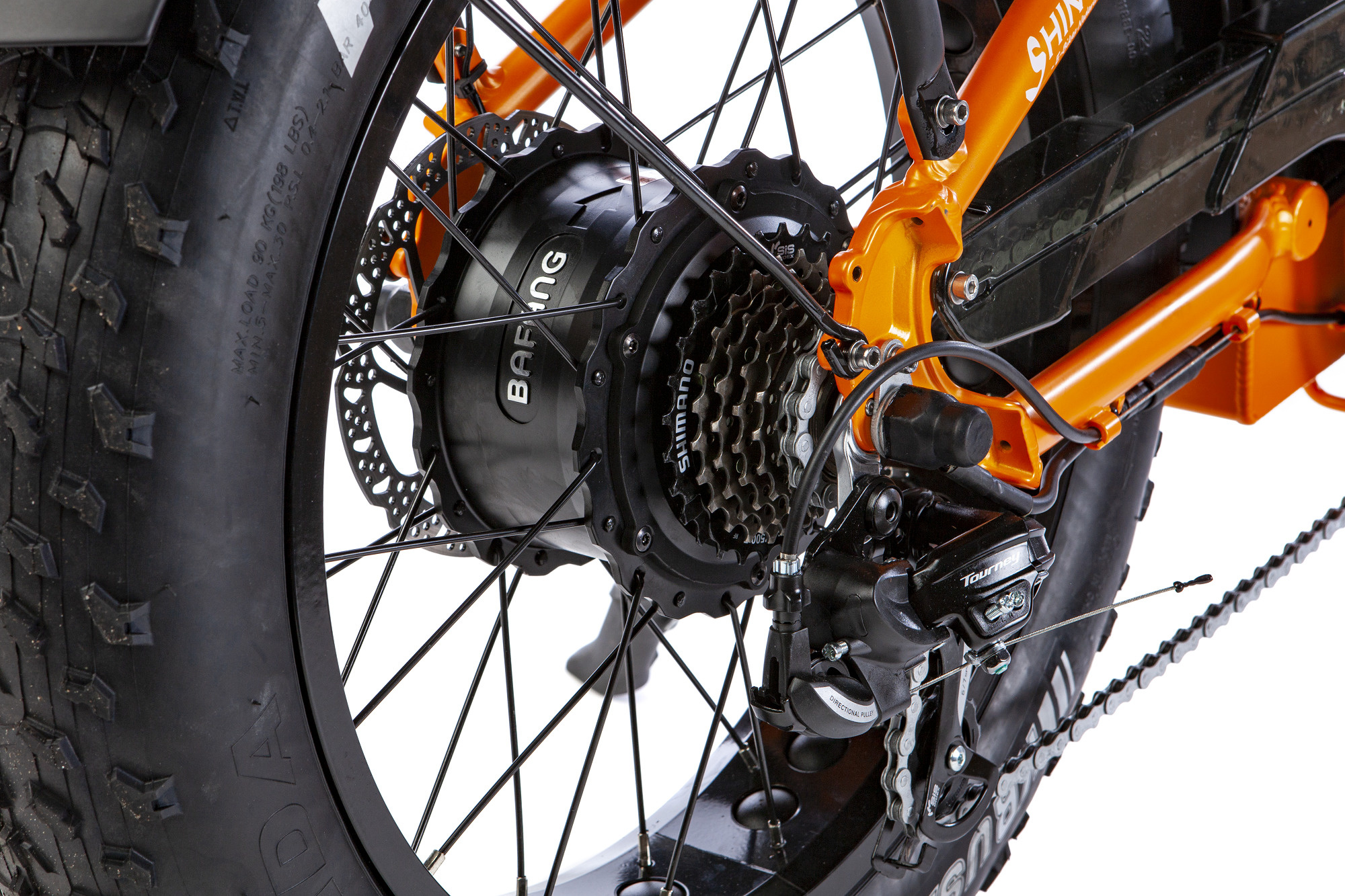 The Lacros Mustang has a specially designed rigid frame and is equipped with a fork suspension for more comfort. A spring seat post can be ordered as an option.

The Lacros Mustang is equipped with a 13Ah/36V Li-ion Polymer battery that is light, powerful and durable. The battery is removable and is secured with a lock. A charger is included with the bike. 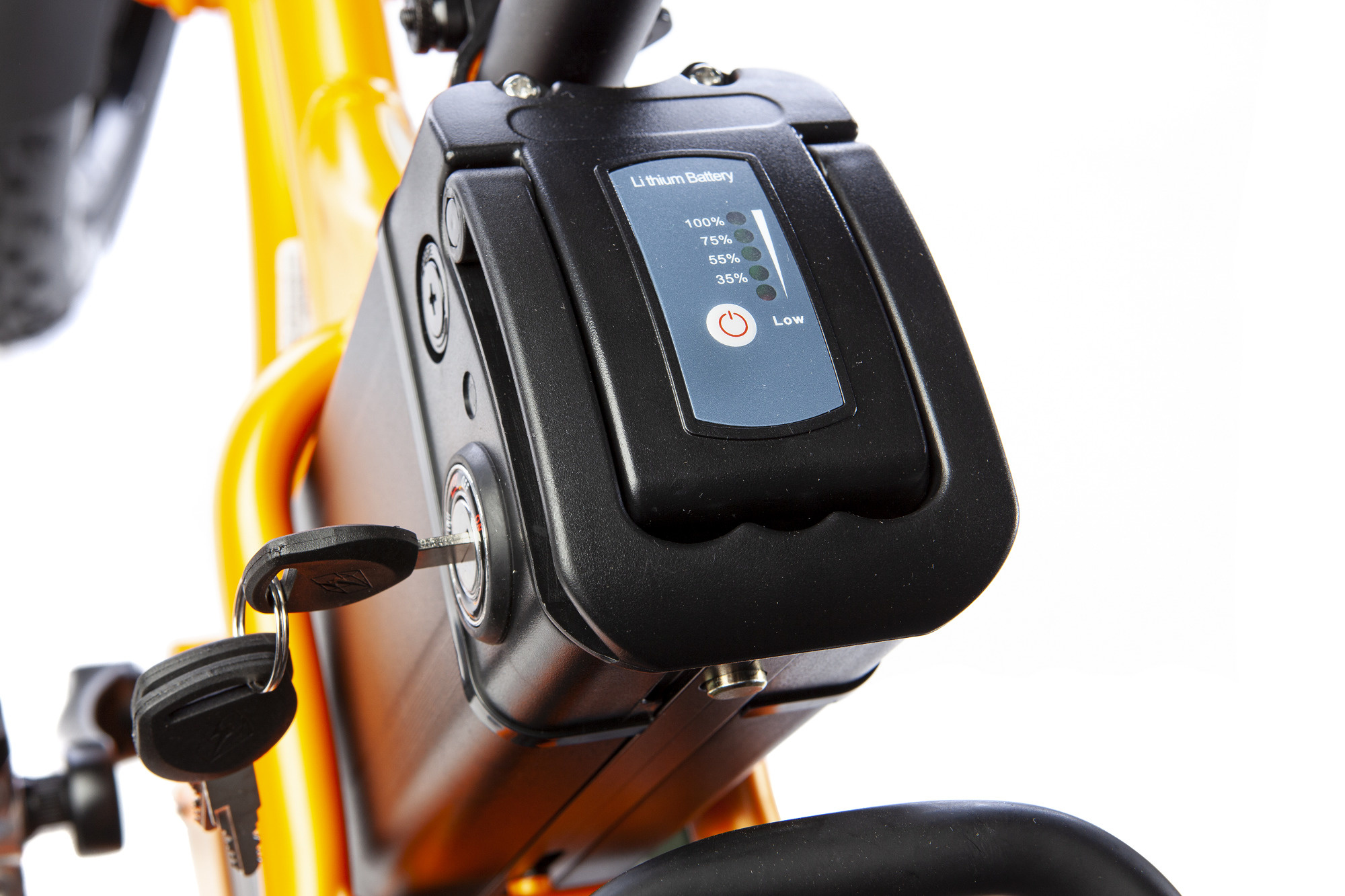 The LCD display is located in the middle of the handlebar. Two buttons on the left side controls the 5 electrical support modes. The display is illuminated and easy to operate. At the touch of a button you can read a variety of information, such as the speed, distance and battery usage.  The support stops at speeds above 25 km per hour. This is determined by Dutch law. You control the lights with the button and the bike is also equipped with a horn. 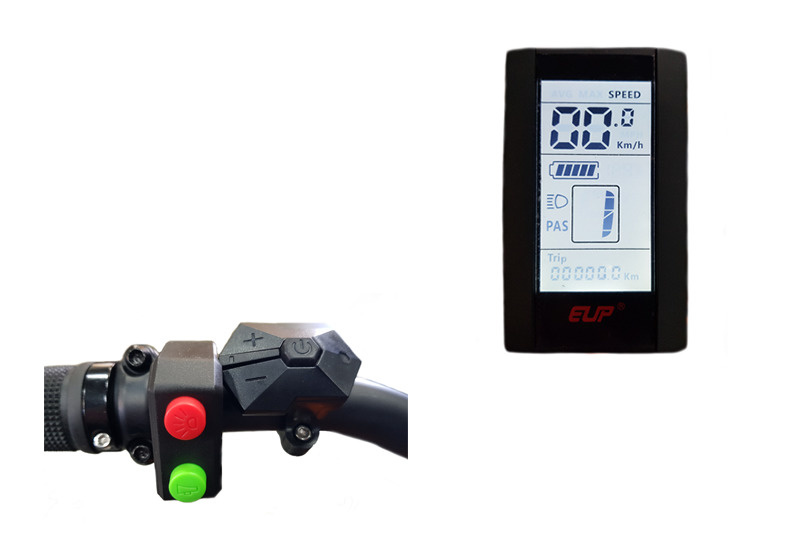 SMOOTH AND POWERFUL SPEED WITH FOCUS ON COMFORT

This Mustang E-bike with 7 gears, 20-inch wheels and brake discs ensures a carefree ride. The stiffness of the frame, the smooth and powerful speed of the 250W BAFANG motor and the sense of control that this e-bike entails, makes you cycle with a good feeling. 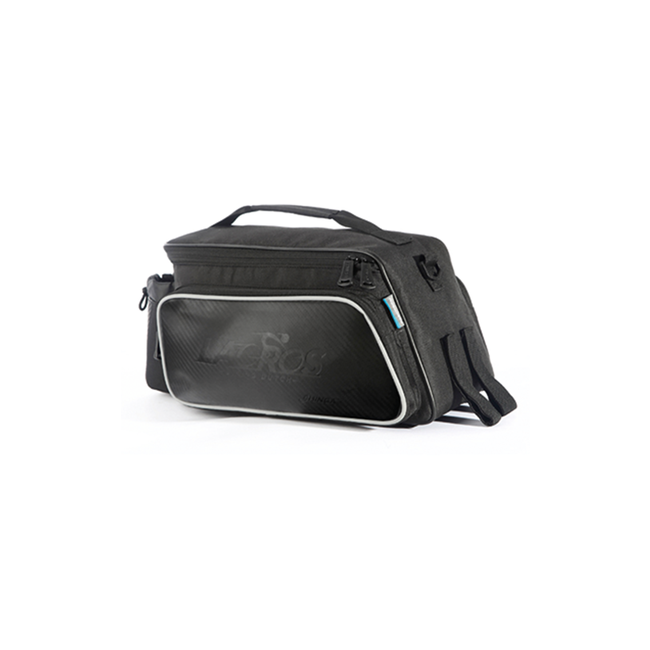 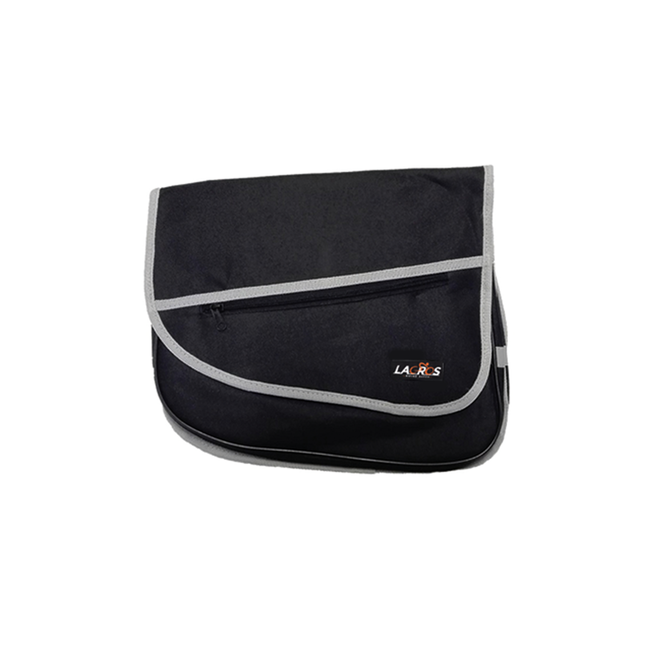 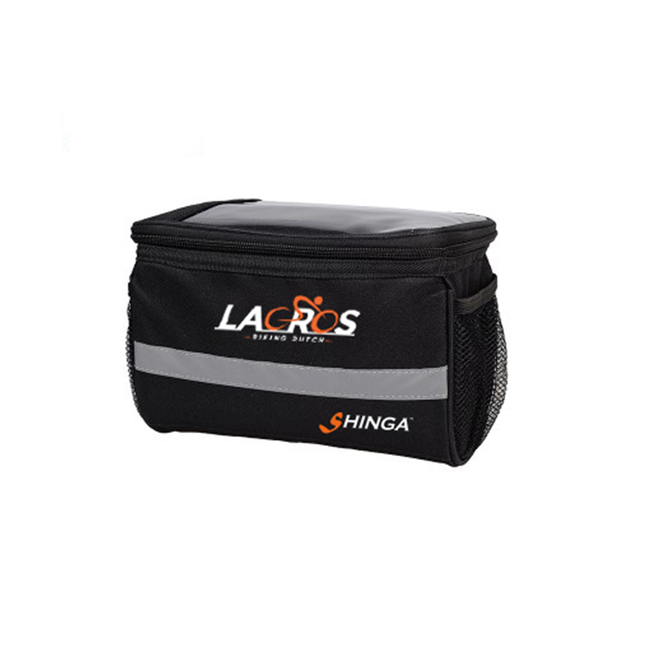 Lacros handlebar bag with card pocket on top of the bag and a reflective stripin..
€20,00 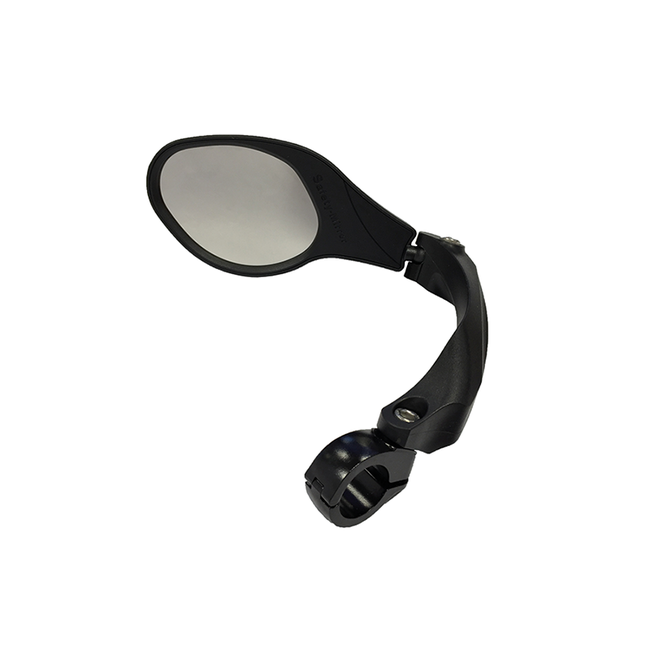 The steering mirror is a handy gadget for your bicycle steering wheel which also..
€20,00 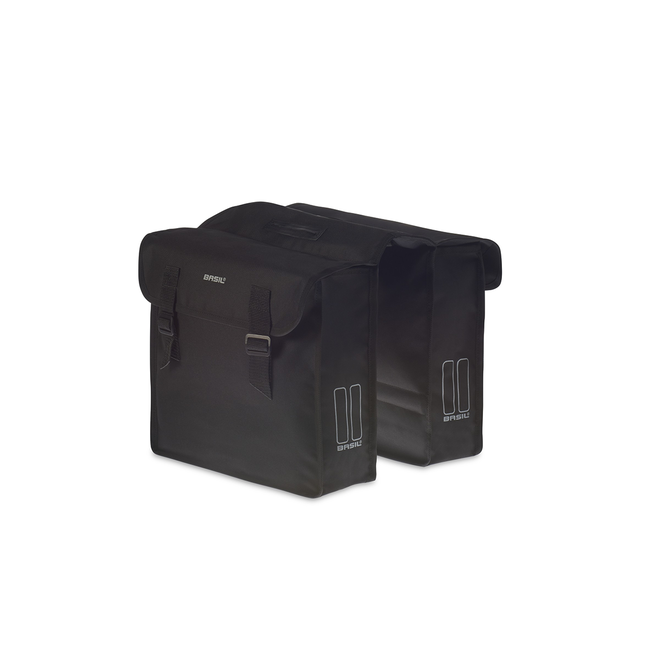 The Basil Mara is a double bicycle bag that comes in classic black. Suitable for..
€30,00 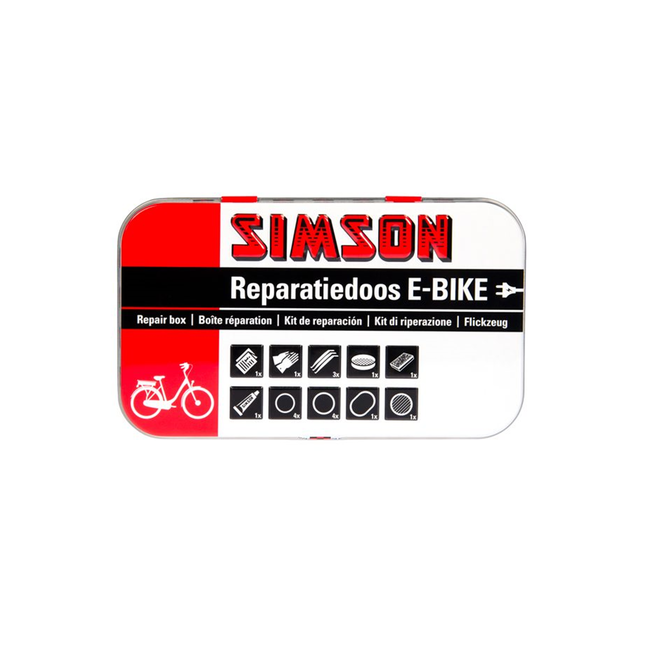 Stay up to date with our latest offers

By creating an account with our store, you will be able to move through the checkout process faster, store multiple addresses, view and track your orders in your account, and more.

You have no items in your shopping cart